What is the Difference Between IPV4 and IPV6?

What is the Difference Between IPV4 and IPV6?

The major difference between IPv4 and IPv6 is how many addresses are available.  IPv4 is still used by 99% of the servers in the world. 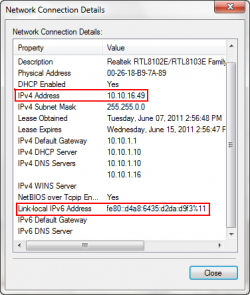 The Internet Protocol version 4 (IPv4) is a protocol for use on packet-switched Link Layer networks (e.g. Ethernet).  IPv4 provides an addressing capability of approximately 4.3 billion addresses.

One of the differences between IPv4 and IPv6 is the appearance of the IP addresses.  IPv4 uses four 1 byte decimal numbers, separated by a dot (i.e. 192.168.1.1), while IPv6 uses hexadecimal numbers that are separated by colons (i.e. fe80::d4a8:6435:d2d8:d9f3b11). The Internet Protocol version 6 (IPv6) is more advanced and has better features compared to IPv4.  It has the capability to provide an infinite number of addresses.  It is replacing IPv4 to accommodate the growing number of networks worldwide and help solve the IP address exhaustion problem.

Below is the summary of the differences between the IPv4 and IPv6:

Advantages of IPv6 over IPv4: